December 30, 2014 – Today, Colorado Ethics Watch released Ethics Roundup: Colorado’s Most Wanted, its seventh annual report on the top ethical scandals in Colorado. From a disgraced legislator under criminal indictment, to a group of Pueblo officials meeting in secret, Ethics Watch’s 2014 Ethics Roundup highlights the most despicable and concerning actions of those we trust to protect us and represent our interests.

“For this year’s report, we are doing what we do best: shine a light on public officials who fail to live up to the high standards Coloradans expect,” said Luis Toro, director of Colorado Ethics Watch.  “When Senator Steve King made his second appearance in one of our reports, it emphasized how critical it is to be vigilant about public corruption even at the smallest levels.  Here’s to hoping we have no more repeat violators.”

This year’s Most Wanted in Colorado government are:

1)     State Senator Steve King (R-Grand Junction) was featured in the Ethics Watch Top Scandals of 2010 report , then a Colorado State Representative, after a “double-dipping” scandal in which he used his campaign account to improperly reimburse himself for $1,400 in travel expenses that were also paid for through state mileage reimbursement payments, and overcharged the state for a rental vehicle.  Senator King has returned to the 2014 Ethics Roundup for a new controversy after being fired from the Mesa County Sheriff’s office for falsifying a time card.  He also allegedly improperly charged Colorado Mesa University for work he did not actually perform. Now under felony indictment and the subject of a Brady Letter, Senator King dropped out of an uncontested race to be the Mesa County Sheriff but has refused to resign from his position in the state legislature.  Thankfully his term ends in January 2015.

2)     El Paso County Sheriff Terry Maketa is embroiled in an ongoing scandal involving allegations that include an attempt to give himself an award meant for rank and file police officers,  misuse of public funds in connection with inappropriate sexual relationships with three subordinates,  responding to an EEOC complaint,  mishandling an internal affairs file in an attempt to influence an election,  and the existence of an unreported million dollar account under the Sheriff’s Office’s control.  Sheriff Maketa has announced plans to retire on Dec 31, 2014, two weeks before his term officially ends.

Colorado Ethics Watch has been monitoring state and local politics in Colorado since 2006, filing legal challenges to ethics and election practices that violate the law, and publicizing disgraceful behavior from public officials and groups that put private benefit ahead of the public trust.  Calling attention to the year’s worst behaviors through this report is designed to encourage public officials and others to act with regard to keeping Colorado’s shared values of transparency and accountability in government at heart. 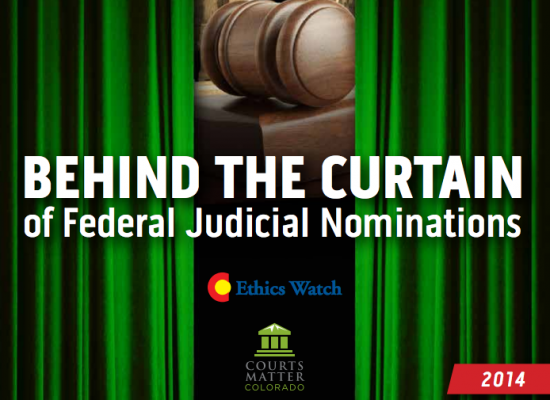 Behind the Curtain of Federal Judicial Nominations
View 0