Home Campaign Finance
May
18
Should Denver taxpayers help candidates for local office pay for their campaigns?
Campaign Finance, In The News COEthics

Erica Meltzer (Denverite)- A group of Denver campaign finance reform advocates are trying to place an ordinance on the November ballot that would allow for public financing of municipal elections, reduce the amount of money candidates can take from individual donors and ban corporate and union donations.

Right now this effort is going by the motherhood-and-apple-pie title “Democracy for the People,” and proponents hope to start circulating petitions in a few weeks. Opponents say there are better uses for public dollars, but the backers of this measure point to evidence from other cities that public financing increases participation in politics by regular people.

“This would modernize and reform local campaign finance laws to make sure it’s open and accessible and most importantly accountable to the people,” said Jon Biggerstaff, executive director of Clean Slate Now, the group behind the initiative. Biggerstaff ran unsuccessfully for the State Senate on a platform that prioritized campaign finance. Clean Slate Now was founded by former Colorado Senate Majority Leader Ken Gordon to work on reducing the influence of money in politics.

Click here to read the full story in the Denverite.

Ernest Luning (Colorado Statesman)- Denver District Attorney Beth McCann on Monday cancelled a tour of the Denver Police Crime Lab scheduled later this week for members of a fundraising group tied to the Denver Democratic Party after a conservative organization raised a fuss.

Kelly Maher, executive director of Compass Colorado, sounded the alarm in a release Monday over an event publicized by the Denver Democrats’ Century Club — a group of donors to the county party who contribute specified amounts — billed as a “Members Only Event!!!” and a chance for supporters to “Get Your Inner CSI On!!!”

Read More
0 Share
May
10
Watchdogs criticize Trump’s easing of ban on ‘politicking from the pulpit’
Campaign Finance, In The News COEthics

Nat Stein (Colorado Springs Independent)- At a press conference on May 4, President Donald Trump issued a directive, announcing his administration is taking “historic steps” to “give our churches their voices back.”

The order, titled “promoting free speech and religious liberty,” urges the end of the Obama-era requirement that employee-sponsored health plans cover birth control and directs the Treasury Department to “not take any adverse action” against individuals or organizations that engage in political speech from a religious perspective. (Remember, post-Citizens United, “speech” means spending.)

Read More
0 Share
May
9
Halliburton In Colorado: Board Member’s Donation Shows Power Of Oil And Gas Industry
Campaign Finance, In The News COEthics

David Sirota (International Business Times)- A top fossil fuel industry official poured $40,000 into the Colorado Republican Party’s super PAC on the same day the state’s legislature began considering a bill to limit the oil and gas industry’s fracking and drilling near schools, according to state documents reviewed by International Business Times. Soon after the contribution from Halliburton board member J. Landis Martin, Republican lawmakers lined up against the legislation. They eventually killed it — days before a deadly blast at a home near an oil well in Northeastern Colorado.

Halliburton has a large presence in Colorado. The company says it employs 1,900 people in operations across the state; it bankrolled a 2012 effort to defeat municipal fracking regulations in the state; and it has a top executive on the executive board of the Colorado Oil and Gas Association —  an industry lobbying group that fought the setback legislation, according to state records. (Halliburton is a member of the COGA and has touted its links to the group in the past.)

One year after Ethics Watch published its Shark Attack report on predatory lender spending on Colorado politics, the industry has significantly reduced its profile. With no bills affecting the industry on this year’s legislative agenda, industry participants do not appear to have spent any money on lobbying as of the April 15 reporting deadline. Political contributions were also down during the 2016 election cycle, with only about $13,000 spent by industry participants. 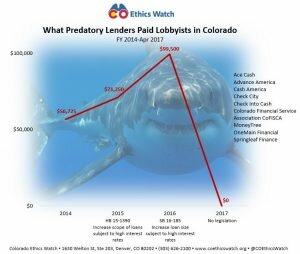 Like the NRA, which vigorously opposes any legislation restricting gun ownership, the oil and gas industry in Colorado steadfastly opposes new legislation it perceives would inconvenience its operators.

Read More
0 Share
Apr
28
A bill to close a dark-money loophole dies in Colorado
Campaign Finance, In The News COEthics

Corey Hutchins (Colorado Independent)- Mystery fliers about candidates in elections that don’t say who paid for them will still be allowed in Colorado after a law supporters said would plug a disclosure loophole died on a party-line vote in a GOP-controlled committee.

“They’re exploiting a loophole to keep voters in the dark,” said Democratic Sen. Rachel Zenzinger of Arvada about political groups who pay for anonymous fliers during election season.

Last November she found such fliers, glossy negative hit-pieces that didn’t say who was behind them, fluttering around her district. She said if she won her election she would introduce a law to close what she called a loophole that allowed them.

Read More
0 Share
Apr
19
Black hole in campaign finance sucking all the light out of politics
Campaign Finance, In The News COEthics

Megan Schrader (Denver Post) – Colorado lawmakers have a chance in the next couple weeks to close a black hole in the campaign finance universe that is sucking all the light out of politics.

When candidates and political committees run honest campaigns based on fact and policy and character, they do so in part because the bright light of scrutiny is shining on their actions and their words.

Colorado’s media try to fact-check political statements, especially those from candidates. But operating in the darkness are third-party shadow groups engaged in the “fake news” of fliers, advertisements and online videos, ads and posts. There’s little accountability for these groups now, but there’s hope.

Five members of the new Council, due to take office April 18, say they’re up for rethinking the city’s code, which allows unlimited donations and doesn’t restrict so-called “dark money” groups. Newly elected Richard Skorman, for instance, says he wants to place a measure on the 2019 city ballot limiting donations from individuals, political action committees (PACs) and corporations to $400 each per candidate.

Dan Njegomir (Colorado Politics)- An oft-criticized feature of Colorado’s campaign-finance law that has been manipulated for years to sling mud and take cheap shots at candidates and political groups is on the verge of reform.

The Colorado Senate’s State, Veterans, & Military Affairs Committee voted unanimously today to send House Bill 1155 to the full Senate for consideration after no one showed up to testify against the measure, and lawmakers of both parties attested to its need based on their personal experience.

Click here to read the full story in Colorado Politics.

Read More
0 Share
1 2 3 … 7
Quick Links
Archives
Subscribe to our Monthly Newsletter
Get the latest news and information direct from us to you.