Approximately one-third of all the outside spending on Colorado state candidate elections happened between October 24, when polls opened, and Election Day, according to a review of public records conducted by Colorado Ethics Watch.

Nearly a million dollars, or eight percent of all independent expenditures during 2016 occurred on a single day, October 28. This spending spike was largely due to a $439,855 expenditure made by a group called Colorado Safety & Justice, which in turn had just received a $420,000 donation from businessman George Soros. The expenditure was made to support Jake Lilly, a candidate for District Attorney in the First Judicial District (Jefferson and Gilpin Counties). 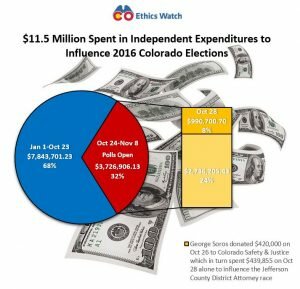