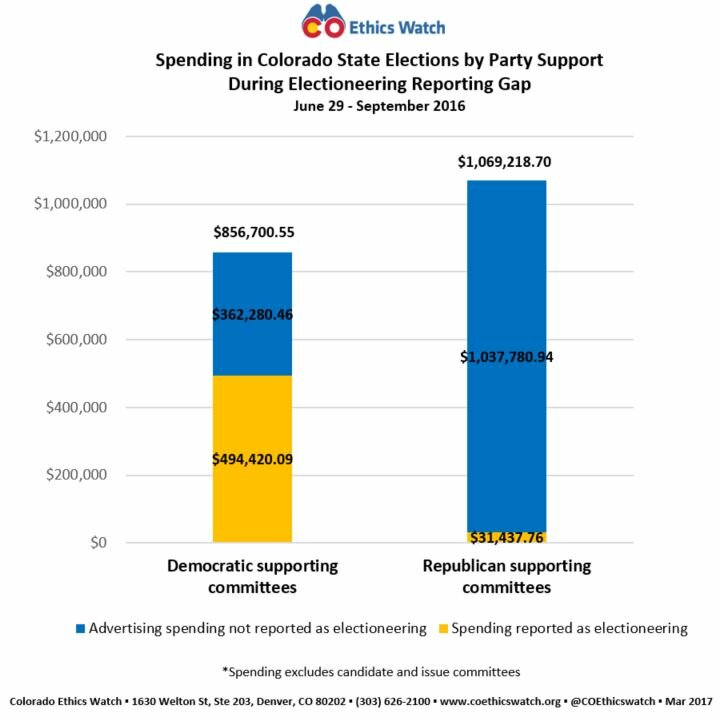 Research by Colorado Ethics Watch shows that at least $1.9 million was spent on political ads during the gap between the date of the 2016 primary and the beginning of the 60-day electioneering communication disclosure window.

Ethics Watch reviewed political spending by groups that file disclosures with the Colorado Secretary of State for the period between June 29 and September 8, 2016. This period was chosen because groups were not required to report spending as electioneering in the gap right after the primary election and sixty days prior to the general election when spending on electioneering communications, defined as ads that name candidates without necessarily urging a vote for or against them (including so-called “call and tell” ads) must be disclosed pursuant to Colorado’s electioneering communications disclosure law.

The $1.9 million figure is almost certainly on the low end because Ethics Watch could only review spending by groups that must disclose all their spending to the Secretary of State under other laws. These include political parties, independent expenditure committees (Super PACs), PACs, and so-called “527” political organizations. During the gap, however, these reports can disclose lump sums for “advertising” but omit important information detailing which candidates were the targets or beneficiaries of the spending. 501(c)(4) organizations and other groups not required to file regular reports with the Secretary of State are not required to file any disclosures for candidate-specific spending during the summer gap, so it is not possible to know exactly how much political advertising was purchased during this time period.

Breaking the spending down by the parties groups traditionally support, Republican-supporting groups outspent Democratic groups by a slim margin. Democratic-supporting groups were more likely to label their spending as an electioneering communication despite the fact that such reporting is not required during this disclosure gap period.

“The traditional sixty-day window before the general election for electioneering disclosure is based on an outmoded belief that the election doesn’t really start until around Labor Day,” said Luis Toro, Executive Director of Colorado Ethics Watch. “We hope Colorado’s laws will be updated to reflect the reality that electioneering for the general election starts the day after the primary and continues through November.”

Click here to read a summary of Ethics Watch’s findings.